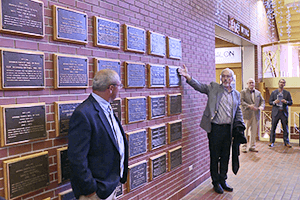 The Monroe County Hall of Fame was created in 1976 as a project for the country’s Bicentennial. It actively added members until 2011, but had been dormant since then.

“Having this event come back is great for all of us,” says Julie Thomas, president of the Monroe County Commissioners. “Because it’s recognizing our roots and the folks who have come here and made Bloomington and Monroe County their home and have done such incredible things for our community. It’s a moment of gratitude.”

“Communities grow and thrive and become wonderful places because individual people do things to make communities strong and evolve and change,” Hamilton says. “And today we’re celebrating people – there were many – but we honored several people who are part of the story of this community from way back in the 19thCentury to today. And hearing the stories reminds you of the importance of having people like that, who grab the community and hug the community and help carry it forward.”

One of those people is Charlotte Zeitlow, who has been active in Monroe County politics for decades. She spoke briefly at the ceremony, emphasizing the need for people to come together to make Bloomington and Monroe County a better place for everyone.

Although the ceremony took place in 2019, those who were honored are considered part of the Hall’s 2018 class.

The Monroe County Hall of Fame Class of 2018 includes:

“This is part of looking back but it helps remind us look forward,” Hamilton added. “And to do the things we need to do to pass on a great community to our friends in the future.” 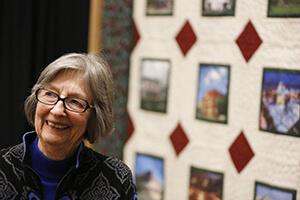 By Marcela Creps Published in the Herald Times on Thursday, March 2, 2017.

“What do you get Bill and Gayle Cook?”

It was a question that plagued Jim Murphy, president of CFC Properties, back in 2003, as thoughts were turning toward the upcoming 30th anniversary for Cook Group, a global medical device company the Cooks launched in Bloomington. CFC is its real estate subsidiary.

“I just thought it would be really cool to put a quilt together,” Murphy said.

In September 2003, the Cooks were presented with a quilt that featured 30 photos of properties the couple refurbished over the years.

On Wednesday, Gayle Cook and Murphy had a chance to revisit the quilt as it was hung to be part of this weekend’s Indiana Heritage Quilt Show at the Bloomington/Monroe County Convention Center.

The exhibit comes with a modern twist — an iPad that visitors can use to learn more about the properties featured on the quilt.

Murphy was excited to show Cook how easy it is for someone to look at the quilt then click on a photo for more information as well as various pictures of the building.

For Cook, it was a fun trip down memory lane as she recalled the various projects she and her late husband tackled. The top left corner of the quilt features the first property the Cooks ever restored — the Cochran House.

Cook explained that restoration was a buzz word back in 1976, and companies were being told “preservation is good for business,” she said. “So we decided to see if preservation was good business.”

At the time, the house at 404 N. Rogers St. was for sale, and people were fearful it would be torn down. There were little “shacks” built around the home that had to be taken out, but Cook said the restoration ended up costing less than it would have to construct a new building.

When they first went inside the downtown Graham Hotel, Cook said, there was a frozen waterfall in the stairwell that went from the roof to the basement. But the building had good bones and its concrete floors meant they could do anything with the building.

Her favorite restoration was Cedar Farm in Harrison County. The large plantation included cabins for the help, an icehouse, a milk house and even a school house. Another picture on the quilt featured the property’s hay press, which used weights and oxen to compress hay for transport.

Cook said the hay press was eventually moved to nearby O’Bannon Woods State Park, where there are occasional demonstrations on how it works, complete with the use of oxen.

Many of the photos relate to Bloomington, including the Canopy of Lights, the Bloomington Antique Mall and the Wicks building. Others, such as the Laconia General Store, in a small Hoosier town southwest of Louisville, may be a little unfamiliar.

Cook explained that the store was a popular stop and the only place to get gas within a 40-mile radius. When the Cooks learned it was being closed because the owners couldn’t afford to install the necessary underground gas tanks, they decided to act.

“So we bought the store and put in new gas tanks and put in a basketball court in back,” Cook said.

Some updates were a real challenge. Fountain Square Mall and the West Baden Springs Hotel both had to have steel beams installed to keep the buildings up and safe. Murphy recalled work on the Faris building in downtown Bloomington. While removing the floor, Murphy said workers found an empty bottle of Pluto water, a French Lick product. The bottle is now on display at the hotel.

“There’s a story behind every one,” Murphy said.

The use of an iPad helps provide a better education on the various restoration projects. For example, the quilt includes the fountain at Bloomington’s Waldron, Hill and Buskirk Park that was originally located at Rose Hill Cemetery. After the fountain had been subjected to vandalism at the cemetery, Cook offered to restore it and move it to the downtown park just south of East Third Street.

The quilt does also give a nod to new construction the Cooks oversaw. The Kirkwood is included as an example of their desire to bring more residents into downtown. “It wasn’t built to pack students in. It was for another need,” Cook said.

Cook also enjoyed reminiscing about the Colonel Williams Jones House that is now a state historic site. Located in Gentryville, the home has a history with President Abraham Lincoln.

“He (Lincoln) worked for Colonel Jones, who built this house when Lincoln was a boy,” Cook said.

The quilt, designed and machine pieced by Nancy Hodson and Diana McGlocklin with additional machine quilting by Jane Pitt, will hang at the convention center during the quilt show. It will then be moved to Fountain Square Mall. A second quilt that is identical to the first will also go on public display, starting at the Showers Building. Murphy said the quilts will then move to various places so that the public can have a chance to learn more about the restoration works the Cooks were involved with.

While the properties that have been restored are beautiful now, some of the “before” pictures might have scared off many potential investors. But Cook never gave into the fear. Instead, she could always spot that diamond in the rough. “There is always a way,” Cook said.