It’s software security firm Cigital, which moved into the building’s third floor at the end of April. While the firm’s line of business sounds solemn — Cigital helps companies build secure applications that protect data — its new office at 116 W. Sixth St. has a bit of Silicon Valley-style flair.

There are front-to-back skylights and large windows overlooking the square. An open design lends an industrial feel. And a lofted area at the back of the space holds a couch and foosball table so employees have a casual setting at work. “It may not be so off the wall compared to other tech companies,” said Randy Moore, assessment center manager for Cigital in Bloomington. “But we thought it was important for us to have a casual area.”

Cigital is the largest of three tenants filling two Wicks building floors that were vacated last year when longtime tenant Technology Service Corp. moved to the west side of Bloomington. Cigital is taking up the Wicks Building’s entire 6,000-square-foot third floor. A photography tenant, Richardson Studio, and a law firm, Andrews, Harrell, Mann, Carmin and Parker P.C., are splitting 6,000 square feet on its second floor. They both plan to move in next month.

The leases represent success for Wicks Building owner CFC Properties, which decided to rethink the building’s second and third floors after Technology Service Corp. departed. “We basically demo’d every wall,” said Jim Murphy, president of CFC. “It had been 25-plus years and just didn’t fit the needs of today’s tenants.”

CFC stripped out much of the two floors’ interiors and exposed brick walls. It held an open house in December to show the spaces as places that could hold large open offices or be built to suit tenants’ needs. Some of that building is going on right now to get ready for the photography studio and law firm on the second floor. CFC also plans some work for the building’s outside and renovations to its entryway foyer.

That will dress up a building that was constructed in 1915 and is on the National Register of Historic Places. It was the site of the Wicks Bee Hive Department store until 1976. CFC purchased it in 1995. The new Wicks tenants all talked about a strong desire to be in downtown Bloomington. Cigital moved just a few blocks from the Chase Bank Building on the southwest corner of Kirkwood and College avenues. The tech firm had outgrown its 2,000-square-foot offices at the Chase Building but wanted to stay downtown, Moore said.

“We wanted to stay downtown for two reasons,” he said. “We have a good relationship with the university, and being downtown, you’re close to the university. It’s also very convenient for entertaining visitors and out-of-town guests.” The Bloomington Cigital office, which is part of a company based in Dulles, Virginia, currently has 30 employees. It wants to expand to 35 or 40 people. “Our goal from the time we opened this office two years ago was to grow to about 20 to 25 people,” Moore said. “We were successful in doing that. It was all our old suite could handle. We ran out of seats.”

For Andrews, Harrell, Mann, Carmin and Parker P.C., the Wicks building provides an excellent view, a custom-built office and a great location, according to one of its attorneys and owners, Angela Parker. The law firm will lease just under 4,000 square feet at the front of the second floor for its fewer than 20 employees and attorneys. It’s planning to move in at the end of June. The new location isn’t too far from the firm’s current location at the Johnson Creamery Business Center at 400 W. Seventh St. “We’re moving from one historic building to another historic building,” Parker said. “We like the location, we like the opportunity to work with CFC — we appreciate working with them on a custom build that’s going to be veryefficient and very nice.”

Richardson Studio will have an additional 600 square feet of space over its current 1,200-square-foot location at 1510 S. Walnut St. after it moves into the Wicks building’s second floor, according to owner Jeff Richardson. It’s shooting for a June 7 move-in date. That will allow it to be in place for the busy summer season, which is full of high school students’ senior pictures. Richardson owns the business along with his wife, Michelle. The studio also has a full-time artist and four part-time employees. “We’ve been wanting to go downtown for a while,” Jeff Richardson said. “It’s a vibe of commerce. There are so many dynamics. It’s where business happens.”

The Wicks Building has several first-floor tenants already in its row of shop fronts. They are Royale Hair Parlor, VIP Nails Spa, and Spectrum Studio/Gallery 406. CFC also owns the Chase Building where Cigital vacated an office to move to the Wicks Building. The real-estate company doesn’t have a new tenant yet, but it’s showing the space. Moving an existing tenant up to a larger space and filling the Wicks building is a success, according to CFC president Murphy. “It’s good for them; it’s good for the industry; and it’s good for Bloomington,” he said. 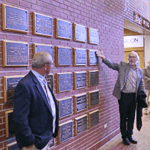 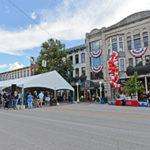