By Michael Reschke
Published in the Herald Times on Thursday, July 17, 2014

With renovations complete and all its new tenants moved in, CFC Properties invited the community to see how it created modern workspaces in one of Bloomington’s oldest buildings. “We achieved our goal of creating the best, most unique offices in downtown Bloomington,” said Jim Murphy, CFC president.

Wednesday afternoon, about 30 people gathered outside as Murphy cut a blue ribbon to commemorate the renovation. After the ceremony, the public was invited inside to meet the newest tenants and see how the Sixth Street building has changed. The building was constructed in 1915. It is listed on the National Register of Historic Places and was the site of the Wicks Bee Hive Department store until 1976. CFC purchased it in 1995.

Technology Service Corp. occupied the second and third floors until about two years ago. After the Crane Naval Surface Warfare Center contractor moved, CFC tried to lease the space on the north side of the square, but didn’t have much success. “It wasn’t marketable in its existing condition,” Murphy said of the traditional office space. CFC decided to gut the two upper floors and create something more modern. The company worked with Cigital, a tech security company, to create an open plan for the building’s third floor.

“We wanted to give everyone their own sense of space, but have opportunities for a lot of collaboration,” said Randy Moore, assessment center manager for Cigital. Cigital moved to the 6,000 square foot space in April. It previously occupied a space in the Chase building on the southwest side of the square, before running out of room. The Virginia-based company currently has about 35 employees in Bloomington, and the space in the Chase building was only meant to accommodate about 20 people, Moore said.

The building’s second floor is split between the Carmin Parker law firm and Richardson Studio photography. Michael Carmin said he and partner Angela Parker decided to branch out from the law firm Andrews, Harrell, Mann, Carmin and Parker P.C., and focus on business real estate. After working in the Johnson Creamery building since 2001, Carmin said he wanted to stay downtown. “They were able to build out for us a design to meet what we asked for,” Carmin said. “It all came together.”

Michelle and Jeff Richardson started the process of moving from a location on South Walnut Street the first week of June. Large windows on the north side of the building provide great lighting for photographs. “It’s also within walking distance of great food and beer,” Jeff Richardson said with a laugh. The basement space has been donated to the Bloomington Coding School, while the ground floor is split between VIP Nails, Spectrum Studio Inc., and Royale Hair Parlor.

A few changes, like new tiling on the ground-floor entryways and a fresh coat of black paint on the ironwork out front, are visible from the outside, but the major renovations are inside. “You wouldn’t recognize the place before,” said Ed Pritchett, with general contractor Pritchett Brothers Inc., as he admired Cigital’s office space. Murphy said there were challenges to renovating the old building, but nothing CFC hasn’t encountered in the past. He wasn’t willing to disclose the cost of the renovation, but did say it was “a pretty penny.” “We’re just ecstatic that we got the new tenants that we have,” he said. “It’s a good indicator that downtown Bloomington is viable and a great place to be.” 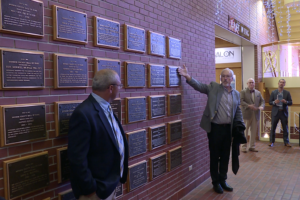 By Mitch Legan Published by WTIU Friday, October 18, 2019 The Monroe County Hall of 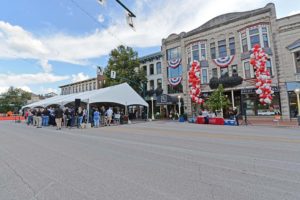 Fountain Square Celebrated its 30th Anniversary Since the CFC Renovation