The Kirkwood: The former Mace grocery store was razed and construction of a new residential housing project is currently taking place, with occupancy scheduled for June 2004.

Back in 1973, a group of Bloomington area business executives formed a property development and management company that laid the foundation for much of what downtown Bloomington looks like today.

“We wanted to recognize Bill and Gayle Cook and Steve Ferguson for all they have done for this community,” said Jim Murphy, President of CFC. “Their leadership has brought us to where we are today. Thirty years is a milestone and an accomplishment for any business to be successful for that long.”

In the early 1970s, the Cooks began their interest in historic preservation. In 1975, the Cooks bought and restored a historic site in Gentryville in Spencer County. The 1834 Colonel William Jones House, where President Abraham Lincoln once stayed, eventually was donated to the state and now is an Indiana State Historic Site and is open to the public.

In 1976, the Cooks restored the 1850 James Cochran House, turning the Federalist-style mansion into offices for several Cook companies.

Cook and Ferguson’s first commercial restoration project was the eight-story Graham Hotel, which had stood vacant in downtown Bloomington throughout most of the 1970s. By 1982, the old hotel was converted to the Graham Plaza office center. The Graham project spawned the adjacent Regester Parking Garage. In short order, several downtown renovation projects, including the restoration of the Monroe County Courthouse, got underway.

“We have always tried to be a catalyst,” said Ferguson last week, before the anniversary celebration. “I suppose we ended up doing more in the downtown than we intended to do ourselves. But others have stepped up. In our case, we always were better moving forward with a vision than in testing the market first.”

Ferguson said the flurry of apartment construction downtown is encouraging.

“But the downtown still is fragile,” he said. “We thought more would have been done by the year 2000. Now we’re getting the housing influx and that will give us a good gauge of what we have.” Ferguson said the downtown has lost some “basic service” businesses, such as hardware, drug and grocery stores. “We’ll see if some of that comes back,” he said.

In the early 1980s, CFC was instrumental in renovating the Illinois central freight depot, the Curry Building, and the JCPenney building. Several apartment buildings also were purchased.

In 1985, the Cooks restored Cedar Farm in Harrison County — an 1837 plantation on the Ohio River. Also in that year, work began on the $10 million restoration of the south side of the Monroe County Courthouse Square. The Fountain Square Mall was dedicated on Sept. 10, 1988.

In 1987, the Bloomington Antique Mall was created out of an old food warehouse.
CFC also was involved in the building of the Bloomington Convention Center and several other downtown residential and office projects.

In 1996, CFC was a partner — along with the city of Bloomington and Indiana University — in turning the dilapidated former Showers Brothers Furniture Factory into a combined city hall, research park and office complex.

About the same time, Cook and CFC began the restoration of the West Baden Springs Hotel in Orange County. The $40 million invested in that project may someday be realized, now that approval has been won for a gambling casino nearby. The hope is that a prospective buyer would turn the historic structure into a first-class hotel, with easy access to the casino.

CFC continues its work today, with the $12 million, 59-unit luxury apartment project called The Kirkwood. Situated at West Kirkwood Avenue and Madison Street, the project should be done by next summer.

CFC Properties’ President, Jim Murphy, believes that investing in high-quality decoration, design, and landscaping goes a long way toward improving the look of downtown. That’s why CFC maintains 25 miles of Christmas lights around the downtown square and keeps its flower boxes overflowing with fresh flowers every day on Fountain Square.

“We hope that rubs off and spreads around,” Murphy said. 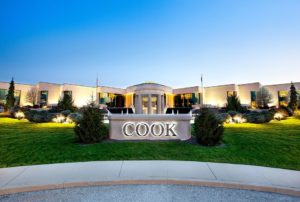