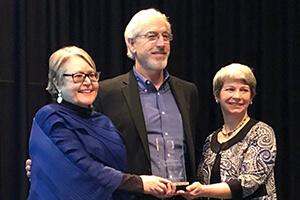 CFC Properties has been a partner and supporter of the Bloomington Parks and Recreation Department for the past 20 years. The company has been an annual sponsor of the Department’s summer Performing Arts Series of free, live musical performances by local artists in city parks, and has helped provide free health screenings to under-served children by participating every year in the Department’s Children’s Expo.

CFC President Jim Murphy has a deep connection to Bloomington and its parks department, which led him to serve on the Bloomington Parks Foundation Board of Directors for many years. The Bloomington Parks Foundation provides scholarships for youth to participate in Parks and Recreation programs, and because of CFC’s ongoing financial support of the Foundation’s scholarship fund, hundreds of children who ordinarily would not have been able to afford to take swimming lessons, attend summer camp, or join a basketball league have been able to do so.

“We are so appreciative of the support we receive from Bloomington businesses and organizations that help us bring quality, affordable programming to all residents and visitors in Bloomington,” said Paula McDevitt, Administrator of the Bloomington Parks and Recreation Department. “We are especially grateful to CFC Properties, which has been a delightful and patient neighbor for the Bloomington Community Farmers’ Market on busy summer Saturdays. Their staff is always helpful when unexpected challenges arise, and they have gone above and beyond to provide assistance when we’ve needed it most.”

“We join the Indiana Park and Recreation Association in thanking CFC Properties for their contributions to our Department, and to the people of Bloomington,” McDevitt said.