SOLSBERRY, IN – Today, though we’ve been faced with the increasing challenges of the unforeseen COVID-19 pandemic, the Yoho General Store continues to serve and meet the needs of the community. On Thursday, April 9th, 2020, the difficult decision was made to lock the doors to the public, however, the service window remains fully operational. In doing so, it brings back a flood of nostalgic memories.

For as long as some can remember, the Yoho General Store has been a staple in serving and meeting the needs of the Solsberry community. Dating back to the 1930s, Yoho brothers, Frank, Oscar, and William operated the general store. Up until 1947, the store’s ownership changed several times up until Dwight Yoho became part owner. By 1950, Dwight became the sole owner and renamed the establishment Yoho General Store.

For nearly 50 years, Dwight (aka Cotton) and his wife Pearl ran the store, providing a safe and enjoyable haven for friends, family, and customers alike to visit. Often, you’d find the Yoho couple sitting on the indoor liars’ bench near the wood-burning potbelly stove listening as others filled them in on the local gossip. Other times, in warmer weather, you’d find a small group of men sitting on the outdoor liars’ bench sharing tall-tailed hunting stories, the days of their youth, and more. Michael Yoho recalled how much he enjoyed listening to his uncle Dwight, aunt Pearl, and cousin Donny’s dry sense of humor back then.

The store offered a number of necessities from sugar and baking soda to ice-cold glass bottles of Coca-Cola and Chocolate Solider to clothes basket liners, including a small line of clothing items and shoes. Many of which, today, would be considered vintage!

Never-the-less, let’s not forget the frozen treats – popsicles, ice cream sandwiches, and the o-so-popular hand-scooped ice cream cones! Lynda Thortan shared, “This was the biggest treat for us – to get ice cream here. Cotton told me once as he was dippin’ out my chocolate ice cream that, “eatin’ all this chocolate ice cream is what gives you them freckles.””

In 2012, CFC Properties, A Cook Group Company with a passion for historic preservation, purchased and committed to retaining as much of the original store as possible during its renovation. The store’s fixtures, plank flooring, liars’ benches, wood-shelving units, Hot Blast Florence Stove, and the old-fashion service window were all preserved during the renovation. Ironically, many years later, the old-fashion service window is still being used – similar to how it was originally intended!

Jim Murphy, President of CFC Properties, shared, “The realization is pretty amazing when you think about it… decades later, the Yoho General Store is still a staple in the Solsberry community.”

Whether you’re looking to reminisce some feel-good memories, fulfill some basic grocery needs, enjoy a tasty meal, including some hand-scooped ice cream, the Yoho General Store continues to stand strong in meeting your needs. As Pat Freeman says, “When you say ‘Solsberry’, you think, ‘Yoho’.”

The Yoho General Store’s manager, Megan Hood, highly suggests calling ahead to place an order; however, walk-up orders are still welcomed. Orders, including pick-ups, can all be handled at the old-fashion service window, just right of the main entrance, where the neon ‘open’ sign is located. Megan says, “Just knock! We’re happy to help fulfill any need from our grocery and cooler shelves to our deli and desserts! Calling in advance gives us time to prep your order and allows us time to meet as many needs as possible in a timely manner.”

To place an order, please call the store at 812.825.7834. The Yoho store’s staff is grateful for the communities’ continued support during this time.

CFC Properties, A Cook Group Company with a passion for historic preservation, purchased and restored the Yoho General Store in 2012. CFC was successful in restoring much of the original store as possible during its renovation. CFC is committed to Solsberry and is grateful that the Yoho General Store can continue to be a staple in serving the Solsberry community. CFC’s passion for historic preservation also extends to Bloomington and Laconia, Indiana, including Canton, Illinois. To learn about additional properties CFC has restored, please visit https://www.cfcproperties.com. 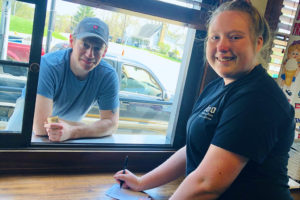 SOLSBERRY, IN – Today, though we’ve been faced with the increasing challenges of the unforeseen